All Collections
Best Practices
Is Churn Buster worth the expense? 🤔

Is Churn Buster worth the expense? 🤔

Written by Ken Johnson
Updated over a week ago

If you’ve been running Churn Buster for at least 90 days, read on! It’s time to answer the big question: is it worth the cost?

Here’s a hypothetical exercise to help you find the answer.

This almost seems like 20x ROI, but we know there’s more nuance to churn prevention than this. Some of these payments would have been recovered anyway via retries, or manual outreach, or by pure chance... while others wouldn't have been, and are the result of the Churn Buster platform.

There are too many moving parts. It’s impossible to attribute all of this recovery to Churn Buster. So we’ll need to find a reasonable estimate to modify these results.

Companies at scale, with enough subscription volume to run deep analysis, have reported 30%+ improvements when compared to a more basic setup (sending a few emails without much further optimization).

Maybe you’re thinking 30% improvement is too high an estimate. That’s ok! Let’s break it down to find a more realistic result.

And only a 5% improvement is worth $1,000 so far—the same amount as your hypothetical CB fee.

But, with subscription revenue, we can’t assume retained customers only issue a single payment. Often they will continue to make additional payments on repeat.

If customers stay with you one extra month after recovery on average, the bar for breaking even on the expense of Churn Buster gets cut in half.

And if they stay with you two extra months: it gets cut in half again.

Note: when these calculations are run for accounts active 12+ months, on average less than 0.5% of recovered revenue is needed for Churn Buster to pay for itself.

And if any internal costs have been offset (maintenance of prior tools, manual work, etc) break-even can happen even sooner.

So what’s the verdict? Does Churn Buster pay for itself, as a “free” upgrade to your workflow and customer experience?

Churn Buster should pay for itself many times over, but in the first few months, even break-even is a good starting point as you grow your business.

Meanwhile, you’ve also probably retained some customers without sending a single email, leveling up your customer experience. Billing-related support issues have been minimized. And your hard-earned revenue is being retained in a reliable, scalable way.

Can I run a report to compare our retention rate before/after?

Yes. There are a few conditions to make this analysis meaningful though.

For example, to compare 6 months before and after starting with Churn Buster, it looks like this:

Education.com conducted a deep before/after analysis, with this conclusion: 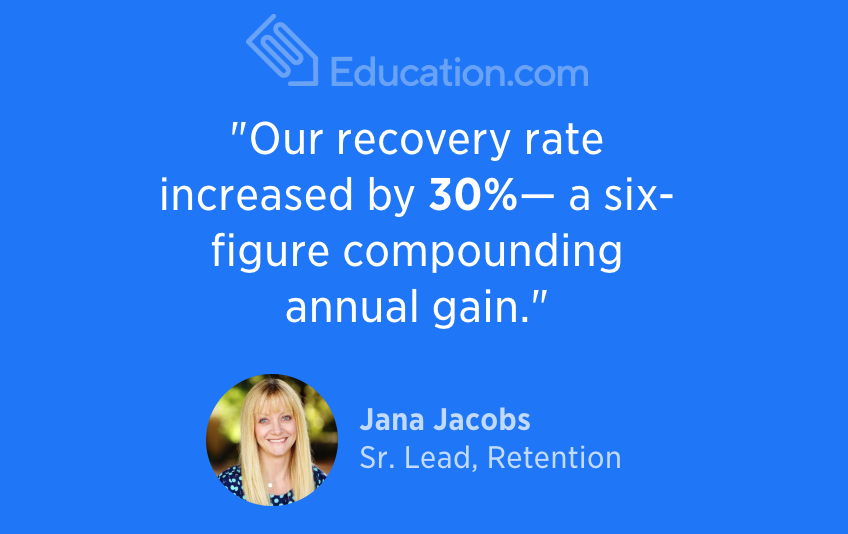 Not every company can expect this kind of extreme impact, but our aim at Churn Buster is to find every possible 1% gain to unlock similar compounding potential.

There's more to addressing passive churn than just the recovery rate. What about the less-tangible aspects — like reducing cancellation risk, avoiding billing-related support requests, and strengthening the relationship with your customers?

Churn Buster focuses on improving the customer experience around failed payments, this crucial touchpoint in the customer lifecycle. Read more >

Did this answer your question?